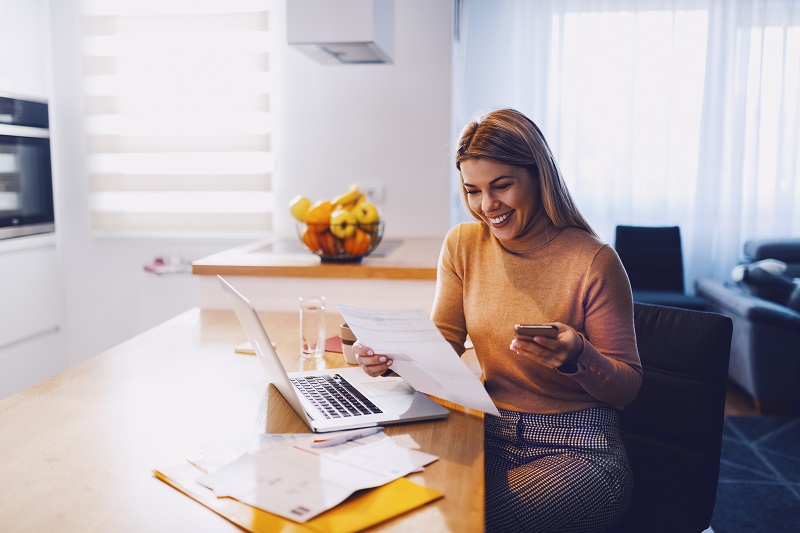 Most people start the year with resolutions, and a lot of them focus on money. Money is something that everyone thinks about, and to learn how to be successful with it, it’s best to listen to the advice of people who have met their financial goals. Knowing what the experts say can be the first step toward changing your attitude toward money and meeting your own goals.

Women often have difficult relationships with money, in part due to things that are beyond our control. As women, we are the main caretakers for our families and more likely to put our careers on the back burner to meet the needs of others. Add to that the gender pay gap, lack of access to education, and lack of funding for female-led businesses, and it’s easy to see how women are at a disadvantage. But things are changing.

The WealthiHer Network is a group of organizations that came together in 2019 to transform the approach to women and finances, supporting them as they protect and grow their wealth with acceptance and understanding. The WealthiHer Network is composed of many organizations, including J.P. Morgan, HSBC Private Banking, and the Royal Bank of Canada, that come together to inspire and empower female clients.

Data shows that nearly ⅓ of all wealth is controlled by women and that, by 2023, women will be worth as much as $93 trillion.

A recent report the WealthiHer Network draws on multiple sources, including the World Bank and the Institute of Fiscal Studies, and compares the financial goals of both women and men in the UK with those in mainland China, Hong Kong, and Singapore. New and exciting insights into the changing needs and wants of women and how confidence and financial education link to influence the attitudes of men and women toward investments and money.

The report surveyed more than 2200 men and women. One of the main findings was that women were more negatively impacted by the pandemic and experienced a loss of self-esteem and financial confidence despite controlling more wealth than ever before. This research has also shown that nearly ⅔ of women want the support of a community and feel that they are not financially savvy. The WealthiHer Network aims to change that, along with some of the other findings, including:

So, what does this report mean? Here’s advice from six female business leaders for women who want to increase their financial literacy.

CEO and founder of Starling Bank

Anne Boden recommends building a rainy day fund, even if you don’t have a lot to save. She believes that, rather than relying on hindsight, careful planning can ensure financial stability. As a business founder, Boden believes that creating an inclusive environment where people want to work is important, especially when it comes to gender diversification. Her bank’s goal is to have 40 percent of senior management positions to be filled by women by this year, a goal which they successfully met. She also thinks it’s important to rethink society’s approach to work, especially when it comes to what is perceived as men’s jobs and women’s jobs. She points out that the early days of tech were heavily influenced by women, but it is now seen as a predominantly male profession. These same ideas should be challenged in finance.

Co-author of the report ‘The Untapped Potential of Women-led Funds’, Partner at Hannah Grey, co-founder of Women in VC

Peltz-Zatulove believes that there are many things women can do, both in their professional and private lives, to learn how to better manage their money and change their mindset. There are new tools and platforms available to help women gain financial literacy and easy to access no minimum investment platforms that can make investing more accessible.

Dr. Jenny Chu believes that the WealthiHer report shows precisely why financial education is necessary to increase empowerment and help women pursue advanced careers in finance. Her advice? Take stock of your current assets and liabilities and figure out a detailed plan to meet your financial goals. She suggests diversifying and being wary of transaction fees.

Contributor to the report ‘The Untapped Potential of Women-led Funds’, an investor at Germin8 Ventures

Milena Bursztyn believes that it’s not fair to say that women are not financially savvy, but that money is a taboo subject that women feel uncomfortable talking about, including managing finances, investing, and asking for advice. She also thinks that this is rapidly changing as women get more and more actively involved in finances. Removing barriers for women is a big step in helping them gain financial success.

Bursztyn believes that, while venture capitalism was once a boy’s club, this is changing. She admits that there are not yet as many women in VC as she’d like there to be, but there are things that women can do to position themselves for the career. Many newer funds are looking for unique talent and entrepreneurs to create a richer network.

Good candidates have a deep understanding of a particular market or industry which enables them to develop a sound investment strategy. Being able to identify emerging trends is one way to make yourself stand out. Any special skill set, relationship with potential customers, or expertise makes you more attractive to fill the role.

According to Bursztyn, managing expectations is also an important skill. Being able to say no while still maintaining a safe and nurturing relationship with people is critical to getting a position as a VC.

Founder and CEO of Vestpod, host of The Wallet podcast

Emily Bellet believed that a lot of women feel they are being patronized when it comes to financial matters, and that money is still so taboo that most women were never taught how to manage their finances. This lack of literacy makes it difficult to understand the jargon and know how to start making smarter decisions. She also feels it’s important for women not to be too hard on themselves. It’s more important to get started. Do what you can. Start by laying out your goals, paying down debt, setting a budget, and building a nest egg. Investing early is key.  Take small steps in the right direction, and in time, it goes a long way.

Any opinions are those of Tom Fleishel and not necessarily those of Raymond James. The information has been obtained from sources considered to be reliable, but we do not guarantee that the foregoing material is accurate or complete.